The Bridgestone Group delivers a wide range of tyres to customers around the world, such as tyres for passen­ger cars, trucks and buses, aircraft, const­ruction and mining vehicles, motorcycles, etc. Evolve supported the UK and Northern Europe Team in designing, building and supporting their bespoke discount and rebate management platform.

Our digital processes have proved so efficient for Bridgestone that an approval system that previously may have taken days now happens in just hours.

At Bridgestone, they knew a change was needed. Trade agreements were being processed manually – hundreds during a two-month period – and cracks were starting to appear. The finance team, in particular, were under huge pressure, having to manually adjust a mountain of invoices and issue credit notes.

What’s more, the process wasn’t auditable or transparent. And that meant lots of errors were causing increased workloads across the business. Customer experience was suffering, and the company just couldn’t react to market changes quickly enough.

When Bridgestone originally contacted us, they thought it was a workflow solution that they needed, but we advised against this. Six months later, Bridgestone got in touch again. This time they agreed and together we decided to run a workshop to identify the issues.

Instead of a workflow solution, we created a unique, cloud-based system for Bridgestone. A complete, fully-automated end-to-end platform that works alongside their existing ERP system.

The platform deals with everything, from the initial budget creation to the issuing of trade agreements. It handles renegotiation and workflow and approval, all the way through to the final version which can be accepted digitally by the customer.

A massive reduction in the time taken to carry out the approval process means Bridgestone staff can now focus on other crucial tasks, too.

There’s also greater transparency, which provides protection for both the customer and the business, with a full audit trail with all changes recorded. And because there’s less manual intervention, accuracy is improved and there are fewer mistakes and fewer frustrations. .. 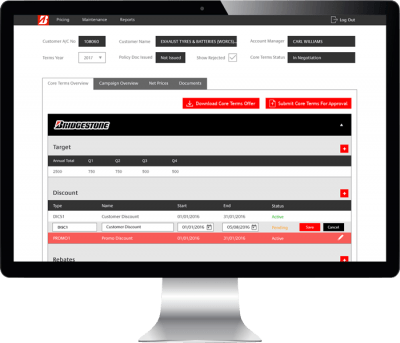